How to Remove Freon from a Dehumidifier? – A COMPLETE Guide
0

How to Remove Freon from a Dehumidifier? – A COMPLETE Guide Can Freon Make You Sick?

Freon is a headache but not because it’s toxic to our health. Quite the contrary, Freon is non-toxic for humans. However, the problem is that it is hazardous for the planet!

When we use and throw out dehumidifiers with Freon, they eventually start leaking the gas. And as it released it into the atmosphere, it lingers for centuries, causing hazardous ozone depletion and the greenhouse effect.

When millions of people do it, Freon suddenly becomes a serious concern.

This then leads to the question: how do you remove Freon from your dehumidifier? Read on to find out!

How Does a Dehumidifier Work?

Firstly, let's look at how dehumidifiers work and how Freon plays into this.

To remove moisture out of the air, dehumidifiers most often use some refrigeration gas, such as Freon.

A dehumidifier first draws in air from our surroundings and lets the moisture in it condense around cooling coils. Inside the coils, a gas such as Freon circulates.

As this cycle repeats, the condensed moisture drips into a reservoir inside the unit while the dehumidified air is heated and blown out. Why is Freon used?

Back in the 19th century, companies used toxic gasses for refrigeration, leading to several widely publicized fatalities that made people fear their refrigerators and put them outside the house.

In response, three main requirements were set in place for such refrigeration gasses; They had to be:

Freon (the trademarked name for six similar gasses used for refrigeration) checked all the boxes and was was chosen as the best refrigeration gas that would assuage the fear of refrigerators.

To date, there hasn’t been a less toxic or less flammable refrigeration gas invented than Freon.

​However, Freon started causing ozone depletion and the greenhouse effect due to how long it was able to linger in the atmostphere - from 12 up to 876 years!

This is why Freon is now a highly regulated chemical. 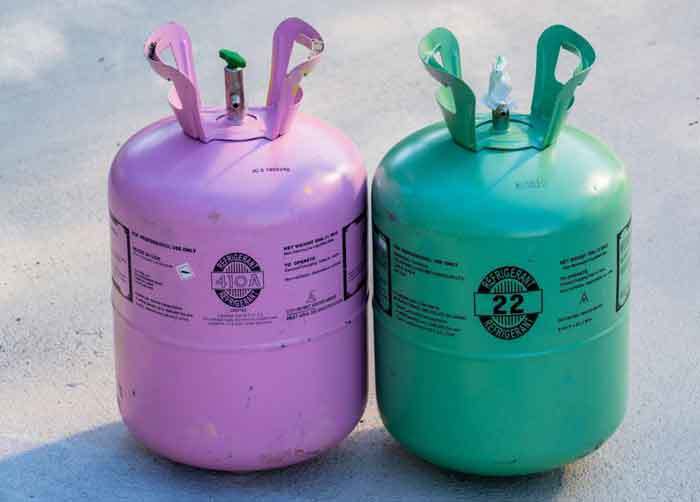 What alternatives are there to Freon?

Freon was used by companies in the past when the need for refrigeration way surpassed the concern about global climate change.

Nowadays, instead of Freon, new appliances most commonly use gasses such as Puron, also called R-410A, which is patented by Honeywell International.

It is considered to not affect ozone at all.

Puron behaves just like Freon inside a dehumidifier but contains no chlorine.

Chlorine is responsible for destroying the ozone layer when vented into the atmosphere. However, Puron does contribute to the greenhouse effect.

Freon is by now largely regulated out of use but some old dehumidifiers can still be found with Freon inside.

How to Remove Freon from a Dehumidifier?

Let's start off by saying: Don’t try to remove Freon yourself!

Doing so may result in the harmful gas being released into the atmosphere.

Instead, to remove Freon, you need a qualified technician who usually works at a recycling or a hazardous waste facility.

There are several facilities and departments that will help you deal with Freon.

Your local hazardous waste facility might be accepting dehumidifiers with Freon.

If not, you can call the local sanitation department to have it disposed of or drained of Freon and returned.

Can I throw away a dehumidifier?

Dehumidifiers with Freon still inside are considered hazardous waste​​​​ and should NOT be thrown in the trash!

How is Freon removed from a dehumidifier by the professionals? Freon removal from a machine is called “reclamation”. While Freon is no longer produced, existing Freon inside scrapped machines is still valuable and can be reused.

What to do if Freon is leaking?

If you suspect Freon inside your dehumidifier is leaking, you will first notice failing performance. The dehumidifier will also develop ice on the evaporator coils or copper lines.

There is no need to do anything regarding a Freon leak except fix the leaking component and perhaps open the windows to air the room.

In the meantime, consider doing the exact same thing our ancestors did with leaky refrigerators – just take it outside.

Conclusion: How to Remove Freon from a Dehumidifier? Freon is a typical example of short-term versus long-term thinking. Companies used Freon because it fulfilled a number of their short-term goals – it made for very reliable and user-friendly appliances that didn’t get them sued if anything went wrong.

However, it’s the atmosphere that suffered.

Long term, we have to realize the atmosphere is a shared resource, one we can’t replace. By acting responsibly and disposing of Freon inside of humidifiers in a safe way, we’re leaving the planet just a tiny bit cleaner for the next generation.

Before throwing out that old dehumidifier to the curb, you should check for and have the Freon inside removed by a qualified technician!